From 1983-1993 my work dealt with self-knowledge. I completed a series of psychologically based figurative projects including prints, drawings and performance works.

In response to the Gulf War, my next series dealt with cultural knowledge. Working first with drawing then moving to linocut, I completed an eight-part Apocalypse Series, suggesting a reversal of the biblical creation described in Genesis.

In 1993 I began using visual books as a means to create more complex conceptual structures. The Pursuit of Knowledge and Labyrinth are sculptural books that reveal four substantially different images when manipulated. A door becomes a wall, a wall dissolves into a void, an entrance becomes a labyrinth.

The philosophy of Plato as my primary source from 1990 to 2004. In Learning Series, recurrent images of train stations, clocks, ruins, and gates suggest the connections between memory and knowledge described by Socrates. Twelve drawings are shown on four walls, surrounding the viewer with a series of triptychs, each consisting of three titles: Learning to Sink, Learning to Swim, Learning to Breathe. As the viewer scans the room, the repeated titles create a cycle of death, transition and renewal. 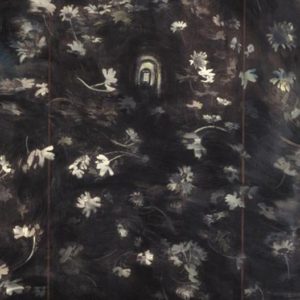 After moving to Tallahassee in 2006, tropical landscape became my primary source and inspiration. Entanglements was inspired by the visual density and complexity of the local vegetation and the primordial world it evokes. The Same Stream Twice continually re-combines the same ten digital photographs. As noted by the philospher Heraclites, experience is ever-changing: even when visiting the same location, we cannot step into the same stream twice.

The Cloudtower Series is based on photographs taken in a cloud forest in Costa Rica. Enveloped in mist, the tropical foliage becomes mysterious and almost monochromatic. Zipline platforms enhance the magical vision. Photoshop is used to multiply fragments of imagery and to expand or contract space. The resulting print serves as the “under-painting” for a much more developed drawing, done with colored pencils and acrylic paints.